SDO held its annual meeting on Saturday, July 8th. Refreshments were shared, and good conversations were held. David Soliday and Tom Wolber were each re-elected to the Board of Directors for another two-year term, while Stephanie Gregory was also elected for her first term. The rest of the Board is excited to welcome her, and looks forward to working with her. 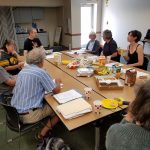 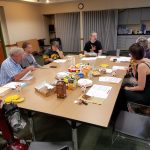 Sheila Fox, another Board member, who will be moving to Columbus this fall, shared reflections of SDO’s history, and invited attendees to share their ideas for moving the organization forward. Here are some of the ideas that were shared, followed by her historical recap.

As we enter our 7th year as an organization, let’s take a moment to reflect on some of what we have been up to and together offer ideas for our future.

SDO was founded in early 2010 and is now a non-profit 501(c) 3 with the mission of promoting “environmental, social and economic sustainability for the Delaware Community through awareness, advocacy and action.

Through the years our group has purchased and overseen installation of bike racks, shown movies and hosted panels, discussions and lectures on a variety of sustainability issues. We’ve conducted tours to water and waste treatment plants, a recycling facility, participated in the GEO solar tour, and we’ve worked with the City of Delaware and the City’s Watershed Coordinator on a variety of issues such as clean-ups and community gardens. Our hardworking, dedicated volunteers have shared the message of sustainability in many venues. We have produced press releases and written many letters to the editor. We regularly table at First Fridays and local events like the Stratford Fall Harvest Festival and Master Gardener’s “Ready, Set, Grow”.

We promoted one of the first local menu week projects and sponsored a neighborhood FreeCycle event.

In fall of 2015, SDO registered as a non-profit 501 (c)3, making us eligible for grants, giving programs like Delaware County Community Market and of course, your donations are tax deductible!

SDO has continued to leverage our efforts in partnering with other non-profits. We helped promote the Community Solar initiative. Thanks in no small part to the tireless efforts of SDO’s own David Carpenter, 35 rooftops have added solar panels!

This past June, we once again partnered with the Northern Olentangy Watershed (NOW) Festival, sponsoring a rain barrel and the infamous Duck Race. We continue to support the great work of Keep Delaware County Beautiful and their amazing director, Jenifer Way-Young, cleaning up our waterways and collecting all types of waste.

Many people learned much more about the serious danger of climate change when SDO, in partnership with Citizens Climate Lobby, Interfaith Power and Light and First Presbyterian’s Earthcare group sponsored 5 free screenings of Leonardo DiCaprio’s, “Before the Flood”, followed by discussion.

In September 2016, SDO was honored to be the beneficiary of Earthdance Ohio, a globally connected festival promoting peace and justice through music and dance.

We’ve tabled at First Friday for many years, and in early 2017 we debuted our “Bag Monster” created from plastic bags, designed to call attention to the issue of plastic bag pollution. Steve and Stephanie Gregory opened their home to the bag monster creation party. Thanks to the Gregory family for modeling the costume at First Friday!

Our members have continued their civic engagement bringing concerns about the proposed bike path to city council and remaining engaged with the concerns and actions around odors in the city.

As we reach the second half of 2017 and celebrate our seventh birthday, we are excited to look ahead and continue our work, promoting “environmental, social and economic sustainability for the Delaware Community through awareness, advocacy and action

Support us on Amazon Smile!